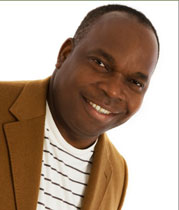 He and his wife, Pastor (Mrs) Funmi Alawale, a physiotherapist by profession, founded God’s Vineyard Ministries (GVM) in March 2001, whilst working as a registrar in Paediatric Surgery of Royal Alexander Hospital for sick children in Brighton U.K.

GVM now has 6 Branches in different cities in the United Kingdom, and branch Churches in Lagos and Abuja, Nigeria.

Pastor Alawale believes that the gospel is the hope of humanity and this is reflected in the mission statement of the ministry – empowering lives and building Society. He is a man of prayer and has intense love for God. He is very passionate about sharing the gospel with everyone. The teaching of Pastor Alawale will open your mind and captivate your understanding for the word of God, it will empower you to look at life in a different way as well as enable you to overcome every challenge that life throws at you.

He hosts a weekly Television broadcast ‘Time of Empowerment’ on KICC TV, SKY Channel 591 (from September 2011 to October 2015). A broadcast which touched millions of lives in Europe, Africa, America and Asia.

Pastor Alawale and his wife are blessed with three children, Tosin, Toyin and Tomi